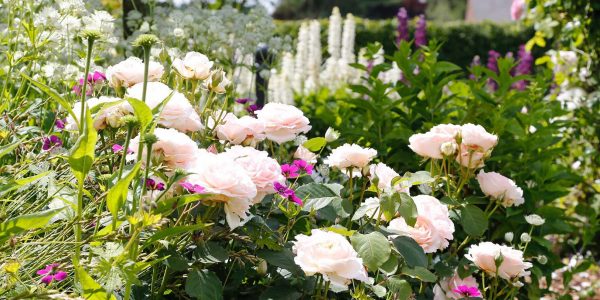 Welcome in our garden

Bruchergarten is an idyllic country garden on the Lower Rhine. Nestled in a landscape dominated by the penultimate ice age, the view goes southeast across the Reichswald heights in the direction of Xanten and in the northwest direction to the old mill of village Uedem.

You are welcome to take a closer look at the garden.

In the spring of 2006, during a walk, a happy coincidence took us past an old house with a sales sign in its enchanted garden. And this old house became our new home after two years of renovation work. Since 2008, the garden has been transformed – step by step til now – into a multi-layered country garden that inspires through every season and lets us discover new things again and again.

Our aim was to cater to the fantastically located property in this beautiful nature and the former small farm estate.

By no means did we want to lose sight of the vastness of this idyll. First impressions can be found in our picture gallery.

Several times a year, the garden opens its doors to visitors. 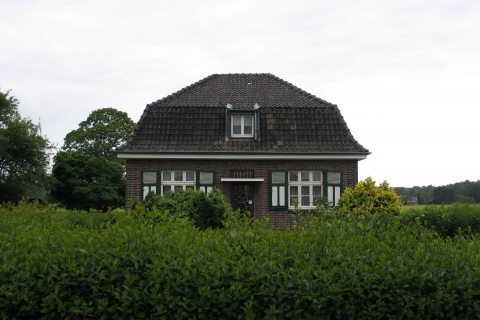 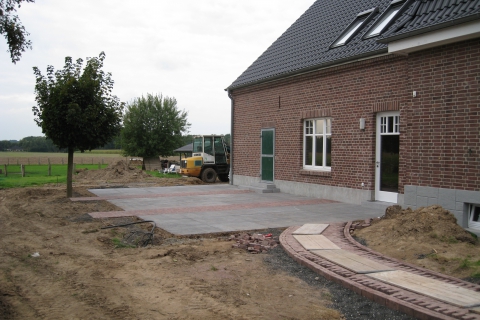 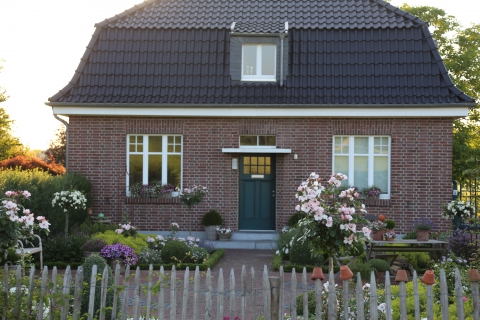 The garden in the course of the year

Countless snowdrops and crocuses are the harbinger of the garden year in January and February. In spring, thousands of daffodils, helleborus and the fantastic blossom of wood  lure out into the garden. The abundancy of flowers, rose scent and clematis characterize the appearance in May / June. In summer, the generous perennials impress with their splendor. Spectacular is the prairie garden realized in 2019. Autumn inspires with its colors and shows the complexity of the garden in all its beauty.

How gradually the splendor of our acres sinks again

in the arm of the winter rest, dull and sleepy! 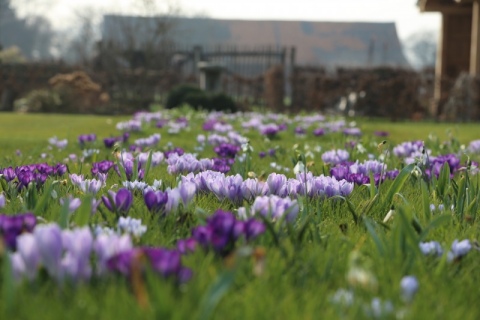 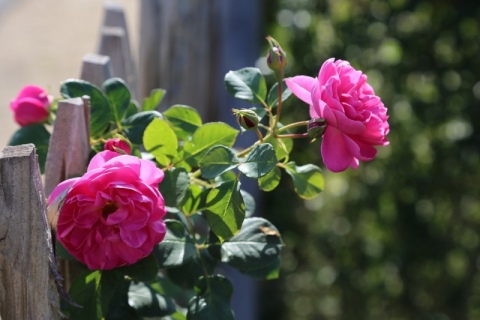 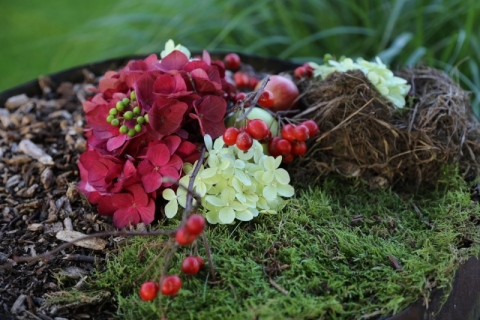 The entire property is about 3,600 square meters. Our first considerations in 2008 were then paving, terrace and pathway around the house, a design of the front garden and the former orchard with an area of ​​about 1,000 square meters. The old trees, which we could preserve, are left over:  2 pears, 2 apples, 2 cherries and 1 walnut tree are witnesses of this bygone era.

The property was fenced on 3 sides with a new hedge of carpinus betulus. In the orchard two spacious shadow borders with mixed plantings found a place. The apple trees were edged with old buxballs and rambler roses were planted against the trees.

The remaining area was used as sheep and chicken meadow and separated with old pasture fence from the garden.

That was fine in the beginning, but then boredom came up …! So we sat on a sunday with  coffee and cake and further considerations were vaguely addressed. Until my wife said indignantly, “You are trained horticultural technician and you always wanted to plan gardens! Now we have a big meadow, so let’s do something together. “

And since then we are infected and enthusiastic and we always think of new things. Actually, the garden is already too small for all ideas and plans.

So in the years 2011 and 2012, the large perennials and a small pond were created. This was also the beginning of our participation in the open garden gate in Kleverland.

The 50th birthday of my wife in 2014 was the starting signal for the design of the large meadow. Instead of red roses she wished herself and received her own ornamental apple avenue. Since then, the ten high tribes “Evereste” not only delight us, but whole swarms of bees and the birdlife. A highlight in every February is the visit of a large fieldfare swarm, which brings over several days with plenty of appetite, the mature apples from the trees. An amazing spectacle. Through such occurrences, our garden is in motion all year round. These are moments of happiness and rich reward for all efforts.

The bar for 2015 was now high and followed by the next birthday present in the form of flowerbulbs border as a background of the avenue. In collaboration with Jacqueline van der Kloet, 8 large carrees were created in the meadow, in which around 10,000 wildflower bulbs bloom from January to May. Off to the knees and planting 14 days long flower bulbs. How big must love be ….

What happened then? The trees needed a background. In the winter of 2015/2016, a 42-meter long and 6-meter-deep wood band originated at the end of the meadow.

The selection of shrubs and trees took place under different aspects. Long-lasting, not too fast-growing, foliage color, fruit decoration, spring, summer and autumn flowering shrubs, attractive even in winter due to bark and growth habit. This wooden border should be exciting all year round. Thus, among other Cornus kousa varieties, Davidia, Prunus, Cercidiphyllum, Acer griseum and Heptacodium found their place.

A large daffodil band pervades the wooden border. It lacked a beautiful graduation stone to the meadow. After a long search we found old granite stones in a stone factory. With my sons, these were set by hand in February 2017. This time, three men were on their knees….

Another color accent is to follow autumn 2020 with autumn crocuses and cyclamen.

And because the list of trees was so long, at the same time we laid a second bed of wood at the beginning of the garden along the road. This border is framed by a picket fence from chestnut. Planted with roses, such as Stanwell Perpetual, Rose de Resht and Allegro as well as Clematis and sweet pea have their flowering appearance.

Since the meadow also has a left and right side and we do not run out of ideas, followed in 2016 a small perennial border on the left side. It is at the same time the separation to the work area (which until then had its place on the right side).

My own dream had been a kind of prairie garden for years. From a part of the vegetable garden and the former economic part my wish became reality in July 2019. Using the color scheme (no white, pink and purple) of my wife, an exciting new section was created. Every day this bed attracts us and is model for countless photos. 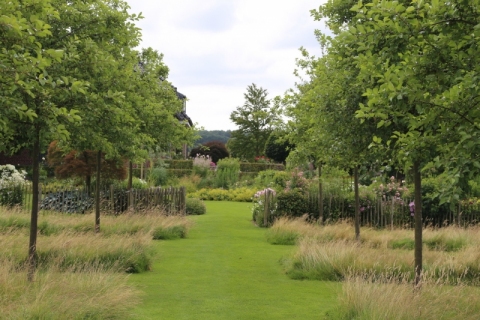 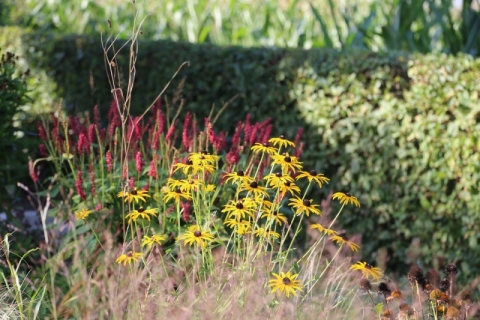 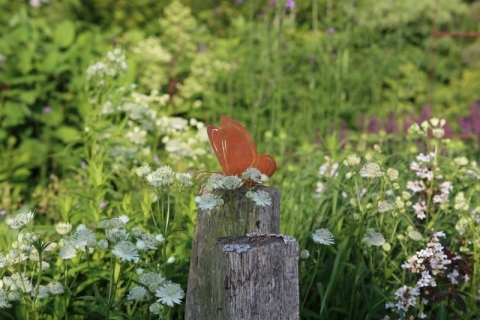 Continuation of our garden story … (written by Jutta Bongers October 2020)

Many plans were forged over the winter of 2019/2020. The redesign and optimization of our perennial border were now in focus. Full of vigor and zest for action, the first of these generous beds started in spring 2020.

First of all, all plants were dug up, several perennial boxes filled and labeled.

The bed needed more depth and so many new perennials had been bought that a good piece of lawn had to make way.

It was a more than good spring cure for the plants and for my husband.

Then our world was attacked by a pandemic called “Corona” and all visits
That we had been looking forward to, we had to put on hold first. This alien virus put down – and that

until today – in large parts normal life is lame.

What to do in this unfamiliar way of life? No question about it, let’s go to the garden.

There was enough work. Due to the climate change, the drought began this year as early as mid-March. Casting was therefore a big topic until the end of September.

The Lower Rhine was particularly hard hit by this drought.

My husband was the great hero with water hoses and sprinklers … I would not have had so much patience and leisure.

For this I pay him due respect.

With all the foundry, we then completely redesigned the area under our old cherry trees.

It has become a nice extension of our shadow garden.

So we arrived in October faster than expected. Right now it’s a joy to walk into the garden. These beautiful colors of autumn just shine everywhere. We have so many hedgehogs in the garden. New bird species have arrived. Two honey bee colonies have joined them. During the winter, thousands of Egyptian geese, rust geese and shelduck visit us here on the Lower Rhine.

They land right next to our garden in the fields and sometimes they stay there for several days.
When we see the formations in the sky and hear the corresponding bird sounds and then we are lucky that the light on the horizon is very special, then these are moments of happiness that touch us deeply.

So the gardening year slowly turns into winter and again plans are being made for the work that is necessary (hedge rejuvenation and pruning) before we start with our largest perennial border in spring 2021.

Continuation of our garden story…. (written by Jutta Bongers December 2021)

The year 2021 was over so quickly. Today my husband reminded me that I should think about the continuation of our garden story. So I get to work. First we wanted to rejuvenate the hedges and the big goal was to completely renovate our largest perennial border.
Sometimes things turn out differently than you think. The hedges were partially rejuvenated, but the perennial border had to wait.
In late spring we were able to get such beautiful shade perennials that we have expanded the quiet part of our garden. We enjoyed this area all year round.
In early summer we had to struggle with plenty of water due to flooding, as we have often done before. Mulched areas washed away, earth shifts. Enough work for a whole summer. So it is with climate change, a year of drought, a year very wet.In early autumn, the focus was on the prairie garden at the back of our garden.
There, too, we couldn’t resist and added and exchanged beautiful shrubs and grasses. And then? October again. Due to the rainfall and the shorter days, large parts of our garden can no longer be worked. We’d do more harm than good. 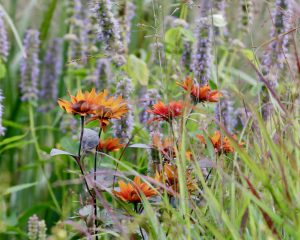 Conclusion:
One thing is certain: “Gardening days and the gardening season are always too short.”
We can push some things into winter. Dressed warmly, the hedge rejuvenation is easy to do and we will continue with it if the weather permits.
The huge herbaceous border has not run away either. We are already looking forward to them
next weeks. I sent prayers to heaven …. no snow, please!

So we say goodbye to the year 2021, enjoy the hibernation a little, the delicious winter vegetables from our kitchen garden and dream of spring.