March cherries are a collective term for several types of ornamental cherries that bloom in early spring and owe their german name to their flowering month.

They belong to the large group of Japanese cherry trees.

In mild winters, these species actually manage to show their full bloom in March. This is more beautiful since all deciduous trees and most of the perennials have not yet been sprouted. Since the varieties of these species are not filled, they also serve as an early source of nectar for bees and other insects.

We have two species in our garden:

Prunus incisa in the varieties “Kojou-no-mai” and ” Cunera “: Both as a trunk and as a small shrub. Thousands of small pale pink flowers and frequented by bees and butterflies at mild temperatures.

It is the earliest species. In old age it can grow up to 2.5 meters tall and have a tendency to become bald. That’s why I cut it regularly and vigorously. 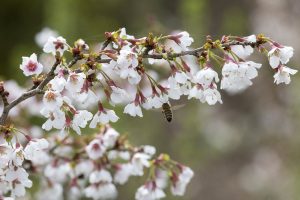 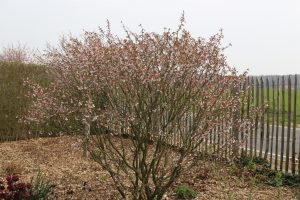 Prunus kurilensis in the varieties: ” Brilliant “and” Ruby “,  as small shrubs.

This species blooms from the end of March and is only 1-1.5 meters tall. The kuril cherry is somewhat more susceptible to the Monilia peak drought. I cut affected branches immediately and dispose of them. They are a little sunless with us, on the edge of the bed in front of larger trees. 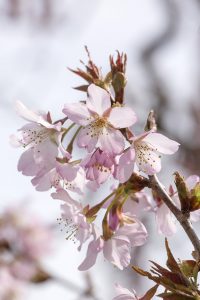 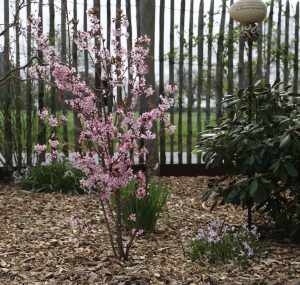 The March cherries are ideal as a protection for early flowering bulbs such as liverwort, anemones, crocus and winterlings as well as autumn flowering plants such as cyclamen or autumn crocus.